Skip to content
You are here
Home > Tennis > Gauff, 15, to face Venus Williams again in first round 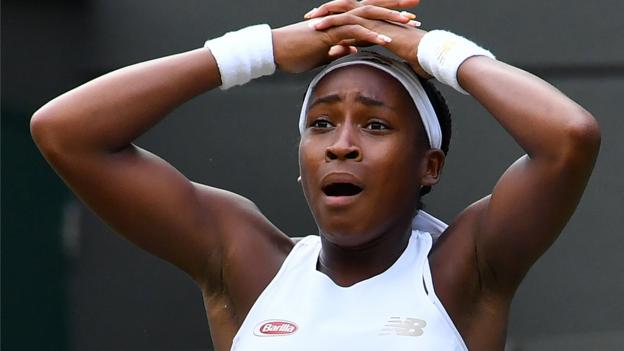 American teenager Coco Gauff will again face Venus Williams in the first round of a Grand Slam after the pair were drawn together at the Australian Open.

Gauff, 15, announced her arrival on the biggest stage by beating 39-year-old Williams, a seven-time Grand Slam singles winner, at Wimbledon in July.

Evans, 29, is playing in his first Slam as Britain’s leading male player and could face Serbia’s defending champion Novak Djokovic in the third round.

Djokovic, who is aiming for a record-extending eighth title, does not have the easiest opener after being drawn against Germany’s world number 37 Jan-Lennard Struff.

The first Grand Slam of the year begins on Monday.

Swiss great Roger Federer has been drawn in the same half as Serbia’s second seed Djokovic, meaning the pair could meet in the semi-finals.

Federer, 38, starts against American Steve Johnson and has a favourable-looking draw, although Bulgaria’s Grigor Dimitrov – who memorably beat the Swiss in the US Open quarter-finals in September – and Canada’s exciting talent Denis Shapovolov are possible opponents before the quarter-finals.

Spanish top seed Rafael Nadal plays against Bolivia’s Hugo Dellien in the first round, with the possibility of a blockbuster fourth-round match against Australia’s Nick Kyrgios.

The pair have not always seen eye-to-eye and met in a dramatic second-round match at Wimbledon last year, where Kyrgios tried to rattle Nadal with constant complaints about the Spaniard’s slow play.

British number two Cameron Norrie plays Frenchman Pierre-Hugues Herbert in his opening match, while Kyle Edmund – who reached the semi-finals in Melbourne two years ago but has dropped to 69th in the world – has a tough opener against Serbia’s 24th seed Dusan Lajovic.

Russian fourth seed Daniil Medvedev, looking to win his first Grand Slam after reaching the 2019 US Open final, has been pitched against dangerous American floater Frances Tiafoe, who reached the quarter-finals last year.